I'm not one to get into very many post-apocalyptic survival scenarios or government melt down scenarios, and I generally avoid nearly every "SHTF" thread I see.

But, something occurred to me earlier: Some of the most effective weapons in historic battles were not modern devices, modern tactics, or modern weapons. They were some of the lowest forms of "technology" possible.

One of them that stands out in my mind, is bees. Not only can you harvest honey, larva, or even mature adults for food; but you can also use the beeswax for many purposes. And, they can be turned into a weapon.

When Alexander the Great finally sacked the city of Tyre in 332 BC, there were two notable weapons that are said to have been the deciding factors that lead to his naval victory. ...without that naval victory, the city could not have been taken**. Those notable weapons were bees and vipers. The vipers and bees (and hornets) were launched by catapult, onto Tyrian ships. When the barrels, casks, and other containers burst open on deck, the incredibly irritated, venomous snakes would cause many soldiers and/or deck hands to abandon ship. Then, the bees (and hornets) would be launched. They took out many of the remaining crew members on the ships, by driving them into the water, or stinging them hundreds of times.

If it wasn't for Alexander's bees pushing so many Tyrian soldiers to their own drowning deaths, he never would have taken the city.

Against a superior ("technologically advanced") force in modern times, I can only imagine that similar tactics would be extremely unexpected, and possibly quite effective. Even the best soldier isn't going to stand around in a swarm of bees, especially those that are allergic (or think they are).
We may not be able to compete with night vision, satellites, IR optics, aircraft (and their FLIR/NV), communications tools, battle tracking tools, and all the other crap we might be up against. But... most of those tools are completely useless against a swarm of bees.

When it comes to surviving an encounter with disparity of force, remember: Think like a pirate.
Anyone else have any comments on the idea?

**(Tyre was actually on an island, at the time. In order to take the city, Alexander had to build a "Mole", or causeway, from the mainland to the island. It was left in place after the siege. Over time, ocean sediments filled in the remaining area around the island, and turned the island of Tyre into part of the mainland. Talk about an environmental impact from military actions. )

I can honestly say that I would never have thought of that. It's genius.I wouldn't personally want to be the person packing bees into a barrel but it would work.

Where I live, a barrel of rattlesnakes would do nicely and be easier to gather.

This is the sort of thinking that has to be done in order to beat an opponent who is better equipped. Thanks for getting me to think outside of the box

I suspect that Alexander had a big enough tribe that some were dedicated to capturing and loading the snakes and bees. What do you think the shelf life of a canister of bees, or snakes is ? Personally my tribe is too small to undertake the collecting, storing and monitoring of canisters of bees and snakes and still sustain food, clothing, shelter, energy and weapons maintenance. If you got the manpower and resources to support it, it might be effectice a few times against a superior force.

Hook686 said:
I suspect that Alexander had a big enough tribe that some were dedicated to capturing and loading the snakes and bees. What do you think the shelf life of a canister of bees, or snakes is ? Personally my tribe is too small to undertake the collecting, storing and monitoring of canisters of bees and snakes and still sustain food, clothing, shelter, energy and weapons maintenance. If you got the manpower and resources to support it, it might be effectice a few times against a superior force.
Click to expand...

My thoughts on the subject simply involved keeping bees in general. From there, they can be used as needed.
Keeping a healthy beehive around is beneficial for gardening and farming purposes, anyway.

Free honey, larvae, and wax is a nice bonus.

I, however, do not possess the knowledge to maintain a healthy hive, and we have a serious hornet/wasp problem in my area. So, it might be nearly impossible for me to keep any here. I'd be willing to give it a shot, though. I hope to sell my house within the next 2 years. Maybe I can give beekeeping a shot at the next homestead.

One of my Scout buddies is a beekeeper/honey seller in his spare time. He goes around and removes hives from people who don't want them (I believe they pay him), then he takes them home. Seems like a great source of active hives!
F

I love bees and have wanted to raise them for a lonnnng time. But I don't know if I'd want to use them as a weapon, it's a good idea, tho.. my husband used to get rid of them for people by killing them. I hated when he told me those stories. Guess I'm kind of a hippie lol...

I'm right there with you. Colony Collapse Syndrome and urban sprawl are serious threats to our future. The entire North American continent needs to come together to protect Honey Bees more.

As urban sprawl takes out the natural habitat of Honey Bees, Hornets and Wasps take over. Once they've taken over the area, it's nearly impossible for the bees to return.
And, the over-use of certain pesticides and fertilizers have been directly linked to Colony Collapse Syndrome, taking out rural populations. All in all, if we don't do something about it, we may have serious issues growing food in the future. (Unless we pollinate all of our crops by hand....)

The European Union banned 6 CCS-linked pesticides between 2003 and 2008, after CCS started appearing in France, Belgium, Germany, and Spain. Because their urban sprawl has essentially been in-check for decades, their Honey Bee populations now show signs recovering.

But... the maker and patent holder on every one of those pesticides is the largest, most influential chemical company in the world, and based in the U.S. They are so deeply rooted in our political system, that many of their CEOs in the last 45 years has served as the head of the FDA and/or EPA; and many served concurrently. (Supposed to be regulating the chemical industry from their government office, while simultaneously fighting the government in their corporate office. Yea... there's no conflict of interest there...) Every attempt Congress, the EPA, and the FDA have made to do something about the issue has failed for obvious reasons.

There are a lot of bee species.
My wife's herb garden attracts them.
European honey bee, ground bees, wood bees, mud bees
There's latin names for them, I haven't the faintest...
Most of them are about a quarter size of the honey bee.
They also pollinate, but produce little honey, no commercial value.
Made a house for them to lay their pupae, over-winter in.
A block of pine 8x8x8". A roll of parchment baking paper.
Drilled quarter inch holes along the grain of the pine.
Rolled parchment paper around a 3/16" dowel to make a straw.
One wrap with a tiny overlap is good
Parchment straw is the liner for each hole.
Straws need to be 2 inches longer than depth of block.
At the back of the block, bend straws over 90 degrees.
Make a back cover from scrap wood 8x8x1" to cover the bent straw ends.
A couple wood screws to keep the back cover on.
All wood needs to be raw, not treated.
Use the pointy end of a pencil to flare the front end of the straw,
and a razor blade, exacto knife to trim the straw flush.
I hung it under the roof corner, away from the sun and wind.

Late winter, remove the straw, unwrap it.
Inside are the baby bee pupae. See any reddish specs? Varorra mites.
Tweeze them away from the pupae and crush em. Varrora eat the babies in the spring.
Big contributor to hive failure.
Will try for a photo tomorrow and post here

Here's a photo of my bee house 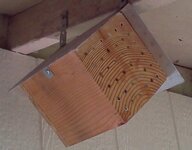 . Not a honey bee house.

Nice. Did you find the edit button? It might be disabled.

FEAR! Your mindset is the key to your survival!
2

Survivalist Reality Show Winner to Get Own Bunker