I’ve had several 1911’s on my “short list” for a while now. The problem has been availability. For some time now Springfield’s and Colts have been hard to come by in my area. The few that do pop up from time to time seem to be priced way over the top. At least more than I’m willing to part with. I did pick up a Springfield Stainless Long Slide and a Range Officer a few months back. But I’ve been wanting both a 9 MM Target as well as a Stainless Mil Spec Model. Neither have been available. This past week I had a couple of shops I do business with call me to tell me that had changed.

One shop said he had 5 of each of both Stainless 9 MM Target Models and Stainless Mil Spec Models come in. I immediately drove over and grabbed one of each. Both are beautiful, and were priced right. There is just something about the Stainless Model Springfield’s that draws me to them. Then, less than 2 hours after I got back home with both of my new found prizes, a good friend that works at another shop I frequent quite often, called me to tell me he had gotten in a nice steel framed, blued, Colt Commander. As they say when it rains it pours. I took a drive over to eyeball the gun. I was really impressed with it.

I’ve been wanting a Commander for a while, but the only one’s I’ve crossed paths with were the Aluminum framed models. I wanted a steel frame, and for some reason they weren’t available. At least they’ve managed to elude me up until now. The all steel Commander feels really good, and is typical Colt quality throughout, with beautiful deep, rich bluing. This shop also deals with Davidson’s, and they also had several of the new Remington R-1 1911’s in Stainless Steel come in just a few days before. The Stainless Remington R-1 is a very nice gun as well. These guns look much better in person than they do in the photos they provide on Remington’s website. It has a beautiful overall fit and finish. I almost bought a blued R-1 Remington several months back from the same shop, until he told me that Remington was bringing out the gun in Stainless very soon. So I decided to wait. It was worth it. This stainless R-1 is really an eye catcher. I’m very impressed with the slide fit on this gun. It racks like it’s on ball bearings. Very well put together for it’s price point.

This shop also had a 2 tone CZ 75B, (Stainless frame and blued slide), that I looked at, and took a pass on just a few weeks back. It was a very nice gun, but I already have the CZ 75B in Polished Stainless Steel, and I couldn’t really justify purchasing another. This time I did notice he had a CZ 97B in .45 ACP sitting right next to it that he had just gotten in. I looked at it and this thing fit my large hands like a glove. I was really impressed with the workmanship of this gun for the price. The gun had nice wood checkered grips and the standard CZ Polycoat finish. I also liked the threaded barrel bushing design it uses. We got to talking and he made me a deal on all three that I just couldn’t refuse.

It’s not very often I do 5 guns in one day, but in this case they were available, and the prices were excellent, so why not! I’ll be heading to the range over the next several days to light them up. I’ve got plenty of hardball in both .45 ACP and 9 MM to keep them well fed. I would go tomorrow, but as luck would have it I’ve got landscapers coming to do a ton of work around my place. I’ll give a range report just as soon as I can. In the mean time I’ll have to be content to simply eyeball them. I’ve already given them a good cleaning and lubing in anticipation of a long range session with all of them. 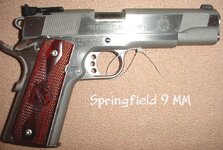 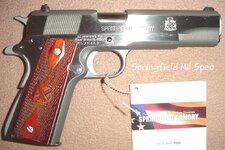 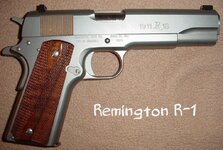 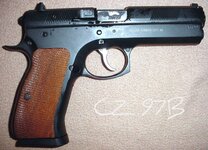 How the heck does changing out your grips cause your 1911 to jam?

Finally joined the CZ family with a CZ SP-01!

Anyone own or shot a Sig MPX and a CZ Scorpion?