Navigation Menu
Navigation
Install the app
More Options
Dark Mode
Help Center
Contact Us
OUT OF DATE BROWSER
You are using an out of date browser. It may not display this or other websites correctly.
You should upgrade or use an alternative browser.

I have been fishing since I was 5 years old, and that is a grunch of years. My granddad used to say I could catch fish in a mud puddle. I started fly fishing with an old split bamboo fly rod I got from Grandpa and an old spring auto retrieve Pflueger reel.

Now, it is Trout, Steelhead, and anything else that will feed on a bug!!

What do you use and go for?

been a long time since I got the old fly rod out. I have an olympic rod and a perrine auto reel I've had since the early 80s. I did recently dig out my fly tying gear though - figured since I am in the PNW I should get back into it.

My thoughts, too. The fly tying bench is out in the brew shed. I still need to hook up the lighting.

I fly fish small streams. Don't tie flies as of yet, but ya never know.

I go for trout only, and use older classic light casting rods. Sage SPL, LL, Scott G, and a Winston TMF

Always looking for more classic rods to add to the quiver!

I love catching trout on light fly rods! Can't beat it except for catching a steelhead on a fly rod!!

I still use the cheap Bi-mart special I bought probably 10 years ago. It's been used and abused but for the small quartzville creek it works just fine. All trout up there. Not sure where i'll fly fish here in Arizona.

Nowhere near the Southwest

My little brother (@SparksFly) and I both use bimart reels on old fly rods. caught many a little trout when I was little on the white salmon with a plain old rod with a fly tied to the line.

^Yup. Missed a 18 inch brown trout on the Snake River in Woutheastern Idaho last summer. Had him hooked after drifting the fly over him a good 40 or so times. Threw the hook literally a second before I pulled home onto the ground. I was pissed.

SparksFly said:
^Yup. Missed a 18 inch brown trout on the Snake River in Woutheastern Idaho last summer. Had him hooked after drifting the fly over him a good 40 or so times. Threw the hook literally a second before I pulled home onto the ground. I was pissed.
Click to expand...

Browns are pretty hard to catch aren't they?

Yeah. And this one was hanging out in a deep spot with lots of current right by the bank. Still annoyed 9 months later.

SparksFly said:
Yeah. And this one was hanging out in a deep spot with lots of current right by the bank. Still annoyed 9 months later.
Click to expand...

"The one that got away"

Joe Link said:
"The one that got away"

I tried fly fishing once or twice, 'bout liked to strangled myself casting! So went back to using my old Fenwick lightweight and even older Mitchell 308 reel. That will catch me some trout.
0

I see this is an old old thread , kind of like me . Anyway , I have 18-22 fly rods from Owt to 8wt . I build most of them but buy one every now and then . I fish only for trout and northern pike . I don't keep them c&r only for me but that's my decision . I mostly fish at the San Juan in NM and every summer I leave for Idaho, Montana and Wyoming . I stay as long as I'm having a good time . I'm an old guy in age "70" and not so old in the head "30" so don't treat me old . So with that being said , anyone in Tucson want to go fishing ?

First brown I ever caught was on the Spokane near People's Park (yeah it's as gross as you might think)... anyway, I had an old school hopper pattern tied on and cast into the pocket near a drop. Thing fought me for about ten minutes since I was using a 2wt at the time.
Another was on the Metolius, saw him feeding under a log and snuck up behind him. Dropped a size 8 egg hook blue prince nymph fight down and pulled it over the submerged log. I saw the guys pupils dilate as soon as he chomped the fly, before I even hooked him.
Had to drag him out from the undercut bank with my hands.

Yeah, I fly fish!
Mostly for trout, but I sometimes go for crappie and bass as well.
I prefer a fly rod in streams and really need to get a switch rod for spey casting.
I can tie my own flies, but really only tie jigs anymore as I've been using a spinning rod a lot more the past few years.

I usually follow a particular style for a few years then change it up.
Right now it's steelhead a bay fishing for rock fish.
Although I caught these in the lake today... 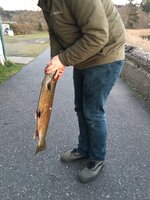 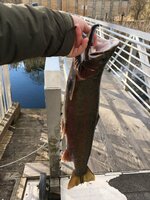 Tied this one myself, it's what they were eating today I guess. 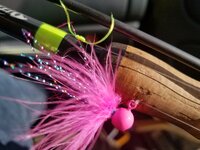 DONT EAT THE FISH in arizona.

Popular fishing in the Southwestern states?