Some black powder firearms of mine....

Here for your viewing pleasure...
Andy 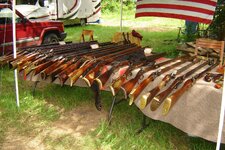 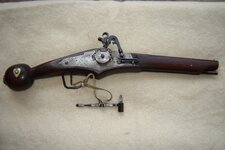 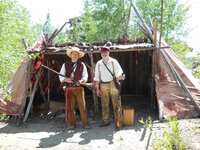 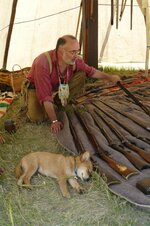 Well its kinda like Lays 'tater chips...you can't stop at one...
Andy 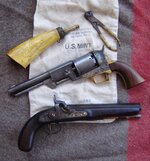 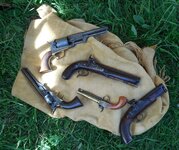 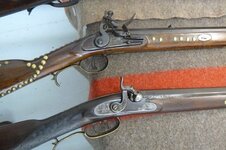 All I have now really is a couple pistols. They are over here. I have a ruger old army with conversion cylinder to 45lc and quick change cylinder pin, a Pietta sheriff and a Pedesoli Howdah 20ga. Pistol. Oh and and old wall hanger navy arms revolver. 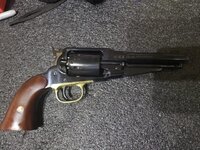 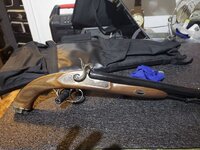 Thats pretty funny, if they had the libtards we deal with today around the civil war era, what they would consider an assault weapon.?
A Springfield trap door?

WyattBurp said:
... if they had the libtards we deal with today around the Civil War era, what they would consider an assault weapon?
Click to expand...

Liberals consider any mechanism that resembles a firearm to be an "assault weapon." Yes; that goes all the way down to the Daisy™ Red Ryder BB gun. In the diseased minds of liberals, people who have a gun have greater power over those who don't. Liberals believe we should all be equal and present no danger to each other under any circumstances.

This, of course, is a pre-K mentality. There will always be those who have guns, and there will always be those who do not. Those who do have shown down through history that the armed very often establish tyranny over those who don't-- even down to a crazy kid murdering grade school kids for no sensible reason. No amount of weed smoked, mushrooms eaten or verses of Kum ba yah sung around a campfire will change that. A man who owns a gun is a Free Man. A man who does not is pretty much waiting around to be a victim of a criminal-- or of a criminal government. Mao murdered 100 million Chinese peasants. If even one of those had a firearm, is it possible he would have used it in an effort to save his life?
W

There is a very large population in our country that are liberal city dwellers that have never been around guns and think they are very scary, what's way more scary is not having one and the goverment does. There was a tea party held in behalf of that last time someone tried to rule the population by force....
Share This Discussion
Link Email Facebook Twitter Reddit Pinterest Share This Discussion