I've been looking to purchase a shooter of this handgun for quite some time, have a Texas ranger model that just sits. So, I find one on KYGUN finally available, purchased it soon as I saw it. Had it shipped to a local FFL that I use, get call it's here.
I pick it up, get it home for inspection, what a huge disappointment I was in for. Blueing is all messed up on frame and barrel, is a cheap knock off of what used to be in my opinion, a great handgun. It looks like it was sourced out to China.
Contacted S/W, they did send a return with fed-ex so they could 'fix it'. Time will tell what kind of workmanship is put into that work.
S/W has had this handgun in for repair, longer than I had it in my possession now, no word from them, other than an email saying they received it 10 days ago.
I've purchased from KYGUNCO prior to this last purchase, with zero problems, it's not on them, other than the fact they should of caught the defects on this handgun, as should of S/W prior to releasing it for purchase. Consumer screwed again it seems.
Finally got ahold of S/W, their reply was we have only had the gun two weeks!! Our turn around is 6 to 8 weeks!! Won't be any S/W guns of any type coming to my house again.
Pics are right out of the box. I never even fired it prior to sending it back to them. 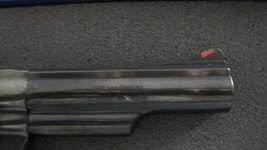 An update on the 357. Finally after 8+ weeks, I get the gun returned to me, saying it had a complete 'refinish' of entire handgun. The flaws were fixes, it looks as it should now. 8 weeks seems a bit of a long wait, but is done now.

While the wait wasn't expected it sounds like SW made it right correct? These days that's something.
Gives me hope they might fix one of my SW pistols.

Whisky Tahoe said:
While the wait wasn't expected it sounds like SW made it right correct? These days that's something.
Gives me hope they might fix one of my SW pistols.
Click to expand...