A stainless lower would be heavy as helsinki-- about twice as heavy as one made of aluminum. The upside is that it would remain serviceable until after the Second Coming of Christ. I'm interested in the durability of the coating that makes it black, assuming there are choices in finishes.

The fact that "M16A1" is engraved on the left side of the magazine well will cause anti-Liberty liberals to soil their BVDs. An M16, as we all know, is capable of taking an intelligent decision to commit a heinous crime, as well as has the ability to drive itself to where it will commit that crime. You may scoff but Chucky Bullschumer and Diane "Dingbat" Feinswine told me this, so we can place full faith and confidence in what these pre-eminent firearms experts have said.

Have recently acquired one and it weighs approx. 12 ounces more than one of my billet aluminum ones.
Run 5.56mm, 22LR and 9mm uppers on it so far, in varying barrel lengths, suppressed and non-suppressed, with no issues.
Will gladly trade the weight addition for the longevity benefit.
Not sure what coating is on it but seems to be holding up fine.
Apparently there were only 104 of these produced. 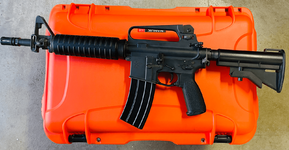 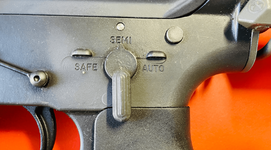 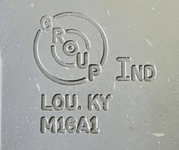 Sunky Heribeck said:
Apparently, there were only 104 of these produced.
Click to expand...

Quite a coup, then, for you to have gotten one. Only 104 made wouldn't pay for the molds, machining and tools to make them; you'd need to produce and to sell many thousands to offset the development costs. You have something that is certainly a rarity in the AR world.

That little pin right above the safety is also enough to make liberals soil themselves-- assuming they know what it is...

nvshooter said:
That little pin right above the safety is also enough to make liberals soil themselves
Click to expand...

This may explain the TP hording/shortage we experienced a while back.

Sunky Heribeck said:
This may explain the TP hoarding/shortage we experienced a while back.
Click to expand...

I remember those days. I bought enough as I was able to find it to go about five years. Still have a good bit of it. I've been looking for distilled water for my CPAP machine for over a week. None at my local Walmart and Raley's. Found some at Grocery Outlet (where I rarely shop) and was a bit of a pig in buying five gallons in one-gallon bottles in one fell swoop. I normally buy just two at a maximum, but the stuff is hard to find. DOT requires I use the machine a certain number of nights per week for a certain number of hours per night. I use it nightly for seven-some hours, so I'm well within DOT compliance regulations. Five gallons is enough for maybe three months, so I'm covered. Decided that never again would I allow my supply to get down to less than a gallon; I'll go buy some more when my unopened supply is down to two gallons.

Went to Wendy's last night for a late-night burger on the way home. No lettuce on the burgers. Was told they hadn't had lettuce come in from their supplier for several weeks. Y'know, we never had these shortages when Trump was in the White House. The day Joe BiteMe took office, this ridiculous crap began. It all goes back to the senile buffoon killing our domestic oil production and paying people with my tax dollars to stay home and do nothing. Any President more stupid than this one would have to be a fictional character in a book or a movie. Joe BiteMe graduated 76th out of 85 at Syracuse. That means he didn't learn 89.41% of what was taught. No self-respecting law firm would ever hire such a dolt, so politics was his only avenue for a job. He only had to bullschumer the electorate once every two years for the House, and once every six years for the Senate. Any wonder why such an idiot went into politics?
D

That Man truly is a dolt and buffoon, (altho that may be a cover persona) not to mention being the Don of the Biden Crime Family. Should he be Called To Account, Hunter may have to run the Family from his room in the Graybar Hotel...

DunRanull said:
... the Don of the Biden Crime Family.
Click to expand...

As an American citizen, I want to know what's on Hunter's laptops. I want to know how many millions the Senile Buffoon-in-Chief received under the table by virtue of Hunter's business dealings with Burisma and with the ChiComms. You can bet your 401k there are some really secret secrets on those laptops-- maybe even secret enough to bring impeachment charges against the old fool.

But what is the Criminal Left Media doing? They're getting all lathered-up about Trump's tax returns. I shall posit this: Trump has been doing business in NYC for forty years. He knows the best way to keep the law off his back is to follow the laws down to the letter. I predict the tax return cases against him will fail and the bravo-itch who's bringing them will be made to look like an imbecile, while Trump will emerge victorious from this latest crucifixion lookin' like a total winner. The Criminal Left Media and the Criminal Left Party are scared schiffless of Trump and of his 100 million voters. The Left knows he must be destroyed-- or he will return the favor on them and they'll be politically-castrated for decades to come.
Last Edited: Nov 22, 2022

Trump is a business man, by definition that means looking for every crack to make a profit. Also means not wandering off the reservation to far to bring conviction into focus.

You all heard the witch resigned, did not want to be minority party leader, poor baby. Knew she did not have the sand of her mouth. 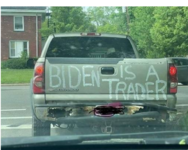 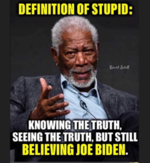 Was that the Biden kid that croaked?

@billdeserthill No, that was Beau. This quote is from the "so called" president, on Thanksgiving day.
B

Sunky Heribeck said:
@billdeserthill No, that was Beau. This quote is from the "so called" president, on Thanksgiving day.
Click to expand...

So just another member of the Biden crime family

Dementia Joe is wrong again, as per usual. Americans are endowed by God to own and to use firearms to defend their lives, the lives of their families, their homes, their property and most importantly their Liberty against any tyrants who would deign to separate Americans from those precious Liberties.

The Framers knew that power corrupts, and that absolute power corrupts absolutely. The Framers knew that the only way to remove an entrenched tyrannical government was to do so with the force of arms. The Framers knew that a military under the control of a tyrannical government would be of no use toward the Peoples' efforts to remain Free and as such, it's the People who'd have to fight and kill to keep their Freedom. That the AR-type rifle uses the exact same ammunition as does the combat rifle issued to government soldiers is a beneficial coincidence in that fight. I'm sure The Framers would see it to be a benefit, too, as they would about 25 million AR-type rifles in the hands of law-abiding American citizens. They'd pretty much say, "If the government has this type of gun, so then should the People... that Essential Liberty be maintained."

I'm also sure that if John Adams was in the well of the Senate and Chucky Bullschumer started spouting-off about gun control and the diminution of Americans' Second Amendment Freedoms, Adams would pull his flintlock pistol and shoot Chucky good & dead right there. Adams was so protective of the Constitution that I've read he'd swat people over the head with a rolled-up copy of it if the swatee didn't understand the Constitution as did Adams. Our beloved nation needs a President like John Adams in these worrisome times-- and Joe "Kickback" BiteMe ain't no John Adams...

Belevolk said:
Trump is a businessman; by definition that means looking for every crack to make a profit. Also means not wandering off the reservation too far to bring conviction into focus.
Click to expand...

I'd add that a responsible businessman knows how to take an informed decision, and how to deal with the problems if the decision was not correct. When your name is on the building, you are the one who is ultimately responsible. Trump has been in that crucible for decades. BiteMe knows nothing about responsibility. BiteMe ain't done a dam-ned thing in Washington for fifty years beyond opening his pay envelope every two weeks. He's the very definition of "useless piece of intestinal extrusion." He's a walking nothing. Sorrowfully convinced that the American People want the government to be involved in even the tiniest nooks and crannies of their lives.

God must be testing the resolve of Americans to remain Free by virtue of His giving to us this low-potential, low-achiever. If we should fail to remove this axxhohl in 2024, then we deserve the pit of raw sewage into which we'll fall by not getting rid of this brain-damaged hair sniffer.
Share This Discussion
Link Email Facebook Twitter Reddit Pinterest Share This Discussion
Sidebar Menu